Out n about chihuahua style!!!

- February 29, 2012
It has been nice here the past couple of days in Virginia (with the exception of today because it is raining and stormed this morning), so we took it upon ourselves to go out and enjoy the fresh air. 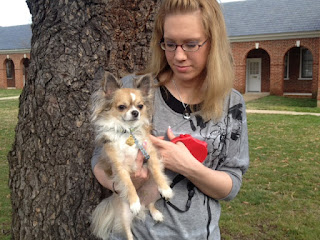 A sheriff's deputy was checking out our other dog Bailey while we were taking this picture, so as you can tell Bullet was thinking "What are you looking at her for, I'm the chihuahua". 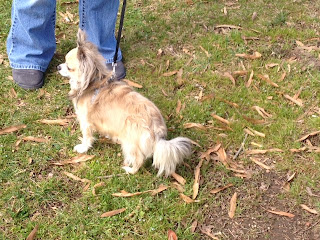 We walked around, and Bullet got his usual "aww's and ahh's" and a woman even asked if she could hold him. Given that some of the areas were a little muddy, I told the woman that he might get mud on her white shirt, she said she didn't care and took him in her arms!!! He loved it :) 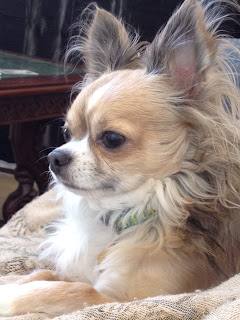 We came home and watched TV and he was settled in for the night. He is slowly getting used to the new sounds in  a new house, and all the new people around him that he sees on the streets. It's time for us to catch up on some Nancy Grace, so with full bellies, we are laying on the couch :)

Since we recently moved, Bullet wasn't in his normal element. Therefore, Valentines Day came and went and he didn't have a Valentine...He was very upset:

He waited and waited, but no one came to be his Valentine:

So, Bullet is doing a giveaway in search of a Valentine :) Furry or human, he loves all!!!


"Won't you be my Valentine? I have this pretty bracelet for you"

If you would like to be Bullets Valentine and would like to receive this bracelet from him, enter the giveaway for your chance to win!

Skin Alley sent me an anti acne pillowcase to review, and I must admit I love it! Sleeping on this pillowcase offers many benefits for your skin, not to mention how comfortable it is to sleep on.
It is a revolutionary new pillowcase that is infused with natural acne medications to help fight acne while you sleep. It is made from bamboo fibers and infused with natural oils to help fight acne. All this, and it's machine washable!


Photos on this post are property of Skin Alley, used for demonstrative purposes only. No copyright infringement intended.

So, what are my thoughts on this pillowcase?
I am amazed at the fragrance of this pillow, very relaxing to sleep on, from the essential oils in it. I have slept on it for approximately a week now, and have not had any breakouts whatsoever!
It is extremely soft, and felt amazing against my face. It helped me sleep more comfortably throughout the night as well.
This will make a great gift this Holiday Season, so be sure to head on over and che…
Read more

Valentines Day is approaching and Bullet needs a Valentine! So, like last year, we are recruiting one :) One winner will receive some goodies for their pet from us for Valentines Day! Please watch our video below for all the details:


This giveaway is not sponsored by any company, it is from us to you!!! Good luck.